MSC has announced a series of new building initiatives that are nothing short of incredible. The first deal was announced back in March and the most recent one, just last week.

Ordered back in March, these two ships will be delivered in 2017 and 2019. They will have a LOA [length over all] of 1033 ft and a beam [width] of 141 ft. The liners will also measure 167,600 gt technically making them larger that the recently ordered Seaside-class [discussed below]. Each ship will have 2,250 pax cabins with a max capacity of 5,700 and 1,536 crew. Confirmed features are enhanced dining options and ‘out-of-this-world entertainment.’

It is rumored that the main theater will be enlarged to accommodate more guests at one seating. There is also rumored to be an ‘amusement park.’ There’s no followup to that last one so your guess is a good as mine. Other features are conjectured to be an outdoor water-park and a two story interior promenade [I imagine this to be a lite version of Royal Caribbean’s Royal Promenade.]

When it was originally announced, a lot of journalists contemplated whether or not the ship would have a split aft superstructure similar to Oasis and Allure. In the very first render above, you can see how the smoke stacks in the funnel seem to be split. This is what had everyone, including yours truly,  guessing that. However, in the render just above, which shows the stern, you can see that this simply isn’t the case.

Also, on the lifeboat deck, wrapping around the stern, there is a large, glass enclosed venue. This could be something similar to Quantum of the Seas’ Two70 venue.

Cabin wise, MSC will be enhancing their ship-within-a-ship concept called the MSC Yacht Club. The entire area will be self contained with a restaurant and lounge. There will also be two story duplex suites. From the renders these seem to be in the front of the ship, just below the bridge. The previous MSC vessels all had the Yacht Club cabins above the bridge.

Forward facing cabins are always hard to design as the wind coming in as the vessel is sailing can make balconies unusable. Most ships just have forward cabins with a window and no balcony. MSC tried to add balconies on previous ships and then added a large glass partition in front. As CruiseCritic claims, it creates quite the glasshouse effect and makes it incredibly hot. By making these cabins 2 decks and making them suites, MSC has found a way to price these usually cheap cabins higher than if they just had windows, and hopefully made the balconies more usable.

Render of the STX newbuild:

In the rendering, you can see the 4 duplex suites below the bridge.

he above new build plan wasn’t ambitious enough, MSC has also ordered the groundbreaking prototype Project Mille design. An exclusive design of Fincantieri, its been nicknamed Project Seaside. The ships will have a LOA of 1,060ft, beam of 135ft, and a height [waterline to funnel] of 230ft. The ships will be 154,000 gt. Each can hold a max of 5,300 passengers plus 1,413 crew.

These are some of the design highlights I noticed that will make the Seaside class stand out. 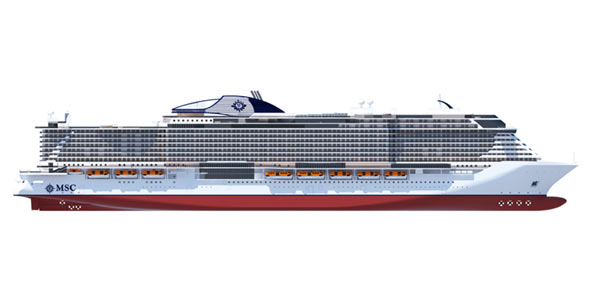 An interesting note, It appears that these ships will have the traditional propeller, shaft and rudder. This is as opposed to azimuthing pods as most other ships in the industry have. Fincantieri has always been opposed to this as they claim it is still an untested and buggy arrangement. The shaft-rudder design is a time proven arrangement they claim.

Plans are to sail the two ships in Mediterranean, Brazil and the Caribbean.

Reaction from the Industry

While most critics are applauding the design due to its ground breaking nature, this writer included, there is one executive that isn’t too happy with it: Carnival Corp’s CEO, Arnold Donald. He is quoted as saying:

We’ll have to see how it all plays out. In an ideal world, you wish it wasn’t happening.

As all four MSC newbuilds can potentially carry 22,000 pax each week (WOW!) Arnold Donald warns that super-aggressive pricing on MSC’s part can become a problem for the industry.

Carnival Cruise Lines is the pioneer to aggressive pricing as they pride themselves on being the most valuable bargain on the high seas. If MSC comes into their territory, year round Caribbean from various ports in Florida and the Gulf, and MSC competitively, or uncompetitively undercuts Carnival, then cruise lines will suddenly not be able to achieve profits from those sailings. They could potentially be sailing ships at a loss in weekly profits since they had to drop prices so low just to fill them up.

Either way, it will just be exciting to have such an innovative design that will surely be used as reference for all future ship designs. 2017 can’t come soon enough.