UPDATE TUESDAY: Here’s the damage to the Silver Shadow 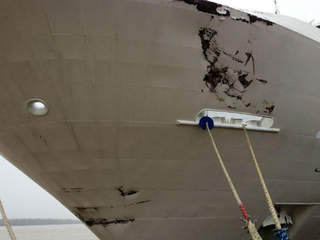 CNN iReports has the following:

We’re on Silversea silver shadow cruise ship and we just collided with a Vietnamese container ship near Halong bay, Vietnam.  We slammed into the side of it, in thick fog

The other ship was severely damaged, and crew hurt, damage to our ship is being asessed in hong kong.  Passengers were called to muster stations.

Our ship has a hole in the bow, heres a pic of the other ship, it was struck in two places – their bridge, and we ripped a large tear in the side too.

I have more pics of the damage, sending this from my cellphone.

Many Brits and U.S. on board

Cruiseline is down playing incident but its serious.

Sent from my iPhone

Silver Shadow was involved in a minor incident on Friday morning at around 04:20 GMT as it was approaching the pilot station in Ha Long Bay, Vietnam. There was contact between Silver Shadow and a local commercial vessel.

Silver Shadow incurred limited minor dents and guests’ safety was never compromised. The ship is fully operational and continued on its course to Ha Long Bay where all shore tours operated normally. It then continued as scheduled to Hong Kong, where it docked this morning local time. Silversea will carry out a full investigation into the incident.

Something’s not adding up. I guess we’ll have to wait to see pictures from the Silver Shadow to see just how serious it was.