UPDATE January 2: All 52 pax have been finally rescued. They are currently onboard the Australian ice breaker Aurora Australis, and are finally on their way home. BBC has this photo showing the loading of pax onto the helicopter. The helicopter landed on some thick ice just beyond the vessel. The passengers disembarked the stranded ship, and were able to walk on the ice to board the helo. 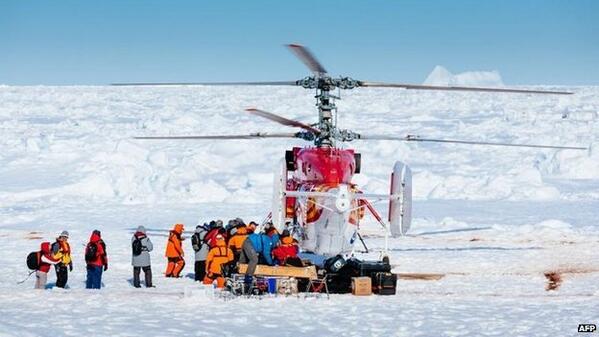 UPDATE December 27: It seems the ship has not been completely freed and she is still stuck in the ice. An update from Marine traffic shows the Chinese ice breaker has not made her way there yet.

The 1,764gt Russian owned ice classed ship Akademik Shokalskiy, has just been freed from ice. She was stuck there since christmas while on a expedition cruise from New Zealand. Just today a Chinese ice breaker has freed the vessel. At no point was there ever any risk to the vessel or her pax and crew.

The International Association of Antarctica Tour Operators have stated that this trip was not on of theirs, however they will be chartering her next month.

She’ll continue on her expedition cruise, though with a slight alteration to her original schedule.